When a beat-up, old bike rack needed to be replaced on the campus of Le Roy Jr.-Sr. High School, there was a likely scenario that could have played out.

The administration would go on a hunt for a new version of the same, outdated style of rack, available for the lowest cost.

But when school leadership takes an active approach of positively representing itself in the community and understands the importance of modeling this for its students, it takes a different approach.

So, when the chance to upgrade the bike parking arose, it was apparent what needed to happen.

But it’s more than just putting a logo on things says Sarah Beckler, Building Secretary for Le Roy Jr.-Sr. High School. “We’re constantly looking to make improvements in general on campus. Yes, with the branding, but it’s more about making students feel comfortable, a place they want to be.”

Finding a Bike Rack to Meet their Vision 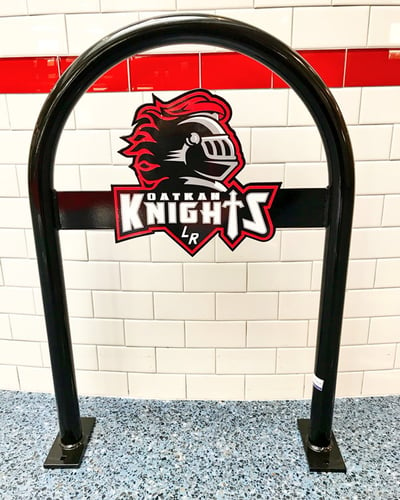 Having a strong sense of what they wanted to accomplish with their bike parking, along with the directive from McArdle being "I want our logo on a rack, and I want it to be sharp and sweet,: Beckler jumped into searching for what was out there.

Wanting an element of customization, Beckler ran into companies reluctant to do the work if it wasn’t easy. It took others a long time to respond.

"We were looking for someone willing to work with us. Make us feel like we’re important to them," says Beckler. "That was the vibe and feeling I got from Madrax."

After some discussions and exchanging ideas with Kaitlyn Ellerman, the Madrax East Coast sales rep, they decided on creating an Inverted U Bike rack with a custom lean bar that would feature the school’s Knight logo.

There was a lot that Beckler and McArdle found appealing about the U style bike racks. They liked them because of the customization, while also being subtle. The flexibility when laying them out was a big draw as well.

Most importantly the bike racks helped McArdle and Beckler accomplish what they set out to achieve.

"These bike racks are great because they’re right in front of our school," says Beckler.
"When you’re pulling up in our parking lot, you’re seeing our logo because of the bike racks."

"It’s a cool element to see all year around when you come to school," adds McArdle. "We see it every day when we walk into our building. It's just another point of pride that we have on our campus. It's great."

Turn your Idea into a Custom Bike Rack

Adding Bike Racks throughout the Campus 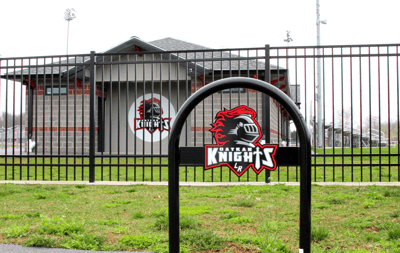 Another benefit of this type of bike rack was the ability to create bike parking in multiple locations.

Although it wasn’t part of the initial plan, bike racks were placed in front of Hartwood Park, the school’s sports complex.

This helps tie the facility to the campus even though it's not right next to the school. The racks allow for a consistent look and feel from the two facilities to be carried across the campus.

"The best part of this type of design is that it's flexible and it could be used in a lot of different places," says McArdle. "You can also easily customize your own logos or images on them as well." 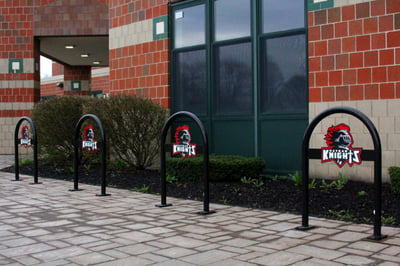 In addition to acting as a great branding tool, the racks have been a welcome addition for the students who bicycle to school.

The kids enjoy them because this style of rack is easy to use. They can lean their bike up against the rack and secure it using a lock.

"They also like it because they’re using something that looks modern," says McArdle.

When looking to add bike racks to a campus, conventional thinking would be to have a single spot to park bikes. But from their experience, McArdle and Beckler say to think outside of the box and consider placing racks in multiple locations.

"There’s places all around a campus or facility where these would be really great to use," explains McArdle. "Think about the pathways students are using to come in and out of campus and how racks could easily be placed in these locations. Rather than just thinking bike racks should only go in one spot."

In the end, the custom bike racks helped McArdle and Beckler improve their campus and turn the "worst bike rack in America" into another symbol of pride and a reflection of the character traits their Knight logo represents.

Thinking about getting your own custom bike rack?
Read the Custom Bike Rack Guide to find out what you need to know.