We've put together more than 46 bike parking space dimensions to help with your bicycle parking design. Get your bike rack layout on point with the spacing, setback, and other measurements found below.

Note: The following recommendations are intended as general guidelines. ALWAYS check and follow your local ordinances and building codes when designing and installing bike parking infrastructure.

You can also check out our bike parking guide. This is a comprehensive resource for creating secure and usable bike parking. 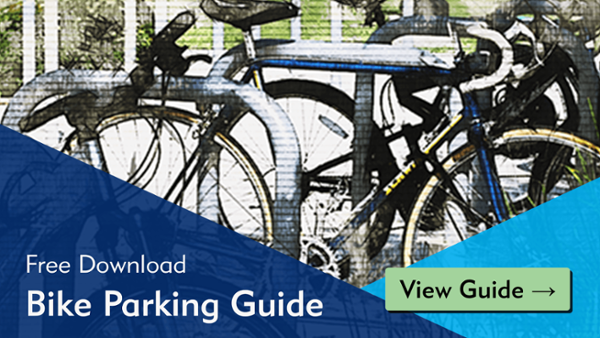 The dimensions of a bike vary by model. In general, most typical bikes will take up a bike parking spot of 30" x 72" x 48" when parked. 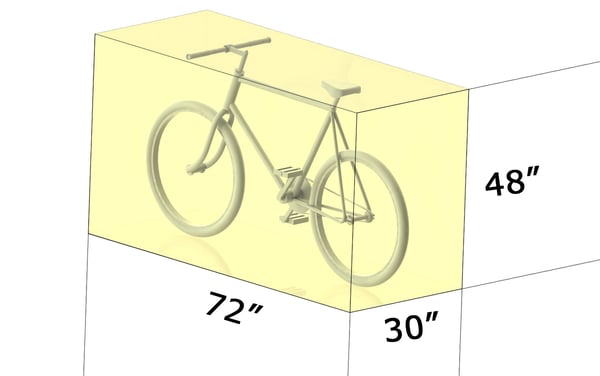 For the footprint of bikes parked at a horizontal bike rack, additional space will need to be added to the dimensions of the bike. In general, the total space to park two bicycles should be 84" x 32".

This accounts for clearance extending beyond the length of the bike. As well as the width of both handlebars with the bicycle frame at the rack. 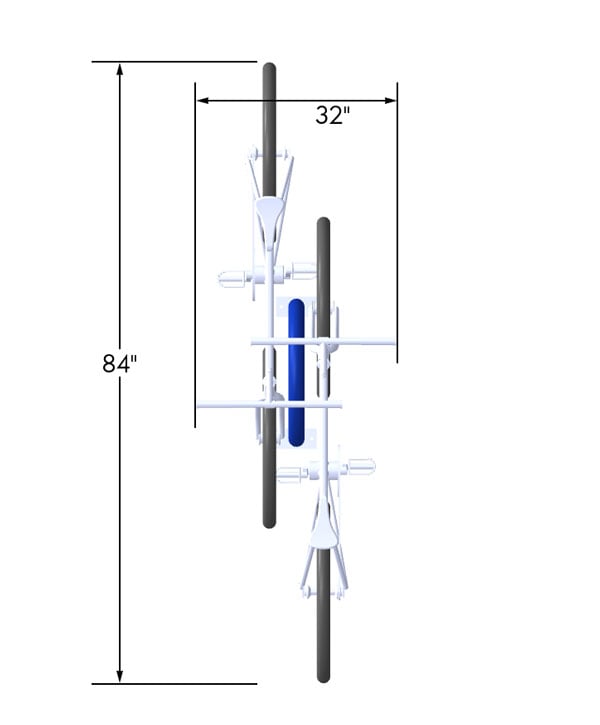 The space needed for bike parking will largely depend on where the racks are placed and their orientation to the curb and walls. Use the bike parking ideas below, along with spacing measurements, to find the standard bike parking space dimensions that will best fit your situation.

Placing Perpendicular Racks Near the Street

When the bicycle is properly secured - the frame and wheel locked to the rack - this distance from the curb will allow for enough room for the remainder of the bicycle. Without extending into the street.

Bike racks should then be placed 48" (36" minimally) from each other. Measured from the center of the rack.

A 36" (24" minimum) clearance from walls or other obstructions will allow enough room to maneuver the bicycle into the rack. As well as access from the side to lock/unlock the bike from the rack.

Bike racks should then be set back 132" from buildings/walls. This will create a 6-foot walkway for pedestrian traffic. While accounting for the remainder of the bicycle that extends beyond the footprint of the bike rack.

Orienting the bike racks to be parallel with the street requires less total area to park bicycles and allow for pedestrian walkways.

For this design, begin by setting the bike rack back 24" from the curb.

Multiple bike racks should be spaced 72" (48" minimally) between the nearest legs.

36" to 48" should be allowed between walls/obstructions and the nearest leg of the bike rack.

The pedestrian walkway is then created by setting the racks 96" from the wall. Measured to the center of the rack. 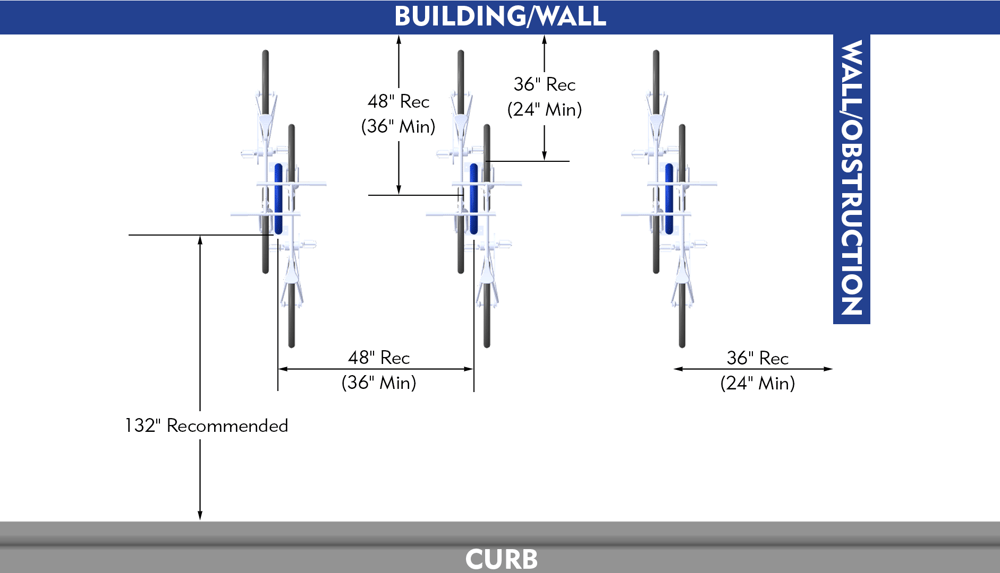 When you'd prefer to have an aisle for pedestrians between the street and the bike racks - as compared to between buildings and the racks - you'll again set the racks back 36" (24" minimally) from the building to the nearest leg. Or between 36" and 48" to the center of the rack.

Then allow for 132" between the street and nearest leg of the bike rack.

When installing bike racks that will be parallel to a building/wall, set them back 24" minimally. Anything less will make that side of the bike rack unusable.

The space between racks is recommended to be 72". Minimally allow for 48".

The nearest leg of the rack should be between 24" and 36" from any wall or other obstruction. Or 48" to the center of the rack.

There should then be 96" from the center of the bike rack to the street. 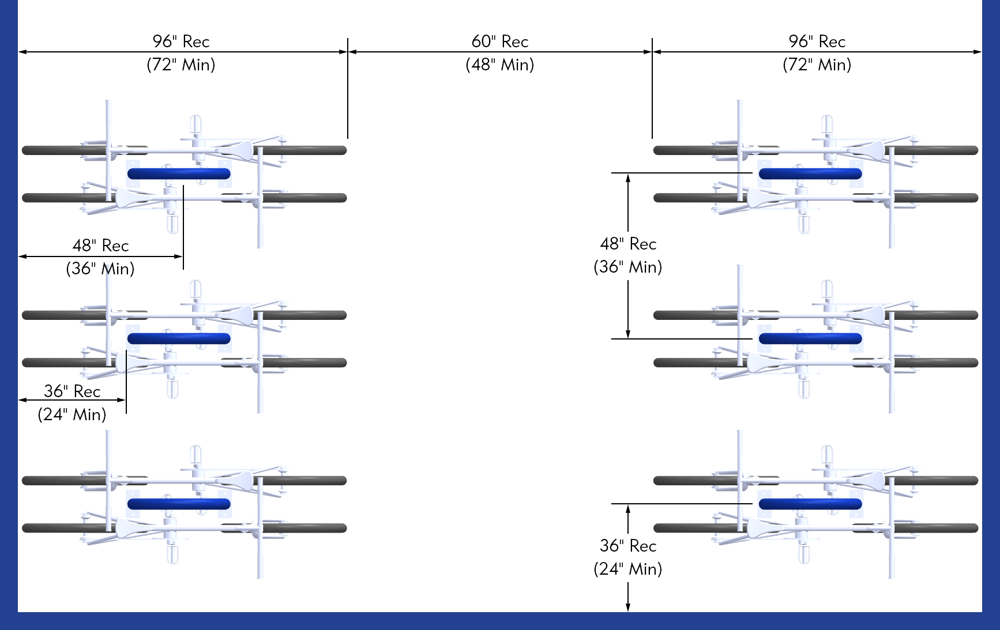 When designing a layout that will create a bike parking lot, consisting of multiple columns of bike racks, one key is to ensure there is a usable aisle between the rows of racks. This will let cyclists easily flow into and out of the bike parking area and racks specifically.

You can start in a corner and place the first rack 36" (24" minimum) from a parallel wall. Then set it back 24" - 36" from the perpendicular wall. Measured to the nearest leg. This distance is needed to allow space for the wheel and  frame to align with the rack for proper locking.

Set backs from perpendicular walls can also be measured at 36" - 48" to the center of the rack.

Continue placing  racks a minimum of 36", 48" ideally, from one another.

Begin another column allowing for 48" - 60" between the wheels. You can use the 72" (96" recommended) measurement of a parked bicycle and desired aisle measurement to determine spacing between columns of bike racks.

Occasionally a bike parking design will need to have columns and rows of bike racks. Again, having appropriate space for aisles will be important for having a useful layout.

The measurement you'll want to focus on is between the racks with different orientations. There should be a recommend 108" (96" minimum) between the nearest leg of bike rack to the center of the other bike rack.

On street bike parking through the use of bike corrals have risen in popularity. Primarily due to the number of bicycles that can be parked in spaces typically reserved for a single car.

The total width available to place bike racks will be dependent on your specific situation, but in a 20' span, you should have plenty of space to park 10 bicycles.

The depth of your bike corral should be 96" minimally when placing bike racks parallel to the curb.

The leg of the bike rack nearest to the curb should be set back 30". The standard 36" - 48" between racks should then be followed.

The end of the corral, typically indicated by markings or physical objects like walls or bollards, should be placed 32" - 36" from the bike rack.

To improve the usability of the bike corral, a buffer or maneuver zone can be added. This makes it easier for cyclists to descend their speed and enter the on street parking. As well as a runway to get up to speed when exiting the corral and entering traffic.

With a 20' area for bike parking and 5' buffer on each end, there would be a total of 30' for entire corral.

To lessen the space for bike parking, the racks can be angled 45 degrees off perpendicular as related to the curb.

This shortens the required distance from the curb to the street to 80".

The first rack should then be placed 20" (18" minimally) from the corral barrier. Measured to the nearest leg. Alternatively, a set back of 32" to 36" can be accomplished by measuring to the far leg.

Setback from the curb should be 24".

A minimum of 36" and recommended distance of 48" should be placed between racks.

Angled bike corral parking can also include buffer or maneuver zones. The same recommended 60" from the end of the corral should be included. The difference is that this would be measured to the nearest leg of the bicycle rack.

The same five bike racks (10 total parked bikes) can be accommodated within 30'.

The bike parking dimensions in this post are primarily based on the use of Inverted U Bike racks, which has a bike rack dimensions of 24" wide.

Note that bike rack size can vary even between U racks . Other styles of racks will also have different bike rack dimensions and measurements that require different spacing distances.

Refer to the manufacturer's installation documentation for appropriate setbacks and other measurements for the specific bike rack you will be using in your design.